Miniarcs are my modern architectural design sets staged and built in the scale of 1-inch equals 1-foot. Good morning San Francisco! A miniature penthouse bedroom I designed & built in a 1-inch-equals-one-foot miniature scale. I photographed these modern miniature design sets from the 33rd floor of 101 California Street, San Francisco, the famous glass skyscraper designed by architect Philip Johnson. I photographed Miniarcs at the crack of dawn to capture the magical morning light of a springtime sunrise over the Bay. I designed and built Miniarcs to exemplify the space and luxury of The Ultimate Penthouse overlooking the San Francisco Bay. 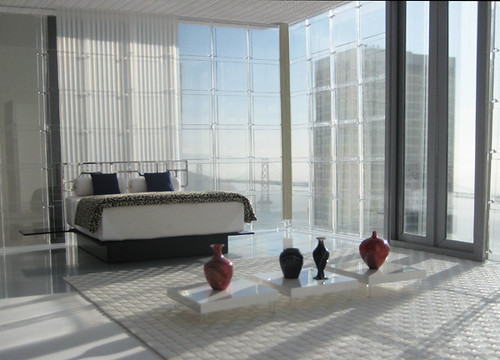 While I was majoring in Architectural History at Smith College, I worked two summer internships at the architectural firms of Skidmore Owings & Merrill and Robert A.M. Stern Architects. I learned two methods for constructing models: one by hand, the other by CAD laser assembly.

Years later, in 2007, while I was living and working in San Francisco, I returned to the art of model building and the result was the creation of Minarcs, which I designed, built, and photographed using the views from my office window at 101 California Street.

Print | Sitemap
© Vanessa Tiegs 2020. Using materials on this website requires permission by copyright law. You may link to this website. To inquire, please write to info (at) vanessatiegs.com